50 Years as a Graduate Program! 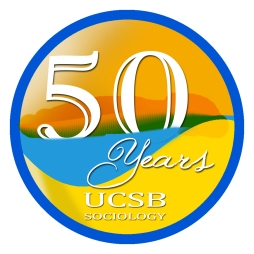 UC Santa Barbara’s Sociology Graduate Program turned fifty during the 2014-2015 academic year. In honor of this milestone, the UCSB Sociology Department Anniversary Committee created this website to provide a space to learn about the many people who have made and currently make our department what it is. Visit the Alumni page to see a list of all alumni of our graduate program. Visit the Current Graduate Students page to learn about current students and their interests.

To celebrate our 50 years, we put on two events during 2014-2015. We kicked the festivities off with a lively reception at San Francisco’s Press Club Wine Bar in August 2014 – during the American Sociological Association’s annual conference. In February 2015, we held a major research conference, where faculty and PhD alumni took stock of the Department’s intellectual and public contributions over the last half century. Click here to see a short video directed by Professor Kum-Kum Bhavnani to celebrate 50 Years of UCSB Sociology.

Visit the Sociology Department’s Website for more information on our program, faculty, and students.